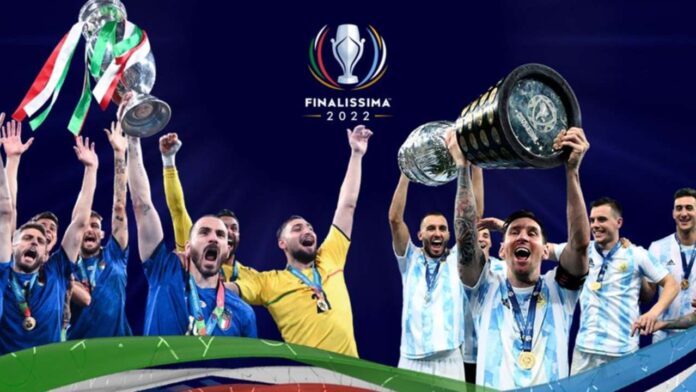 On Wednesday night, June 1, 2022, the Finalíssima will be played at Wembley, a one-off duel between the European champion and the winner of the Copa America, or Italy versus Argentina. The ‘Azzurri’ blamed themselves by losing 0-1 to North Macedonia in the World Cup qualifying play-offs which means it will once again fail to go to the World Cup. Apart from the Nations League, this is the only cup they can grab this year. Until the 1-2 defeat against Spain in the Nations League on October 6, 2021, Italy was unbeaten for 37 duels. In the five matches it has played since, it won only twice. For the match against Argentina, it is still missing the injured Federico Chiesa up front anyway and Serie A top scorer Ciro Immobile will not be there either. Defensively, the team is strong as usual and Bonucci and Chiellini will most likely be back in the center.

Unlike Italy, Argentina is doing great. Lionel Scaloni’s team remained completely undefeated during the South American World Cup qualification series and thus won the Copa America last year. The Argentines are unbeaten for a total of 31 consecutive games and with players such as Messi, Di Maria, Dybala, Correa and Lautaro Martinez have a surplus of offensive qualities in the selection. But defensively, the team is also doing well and managed to keep the zero in seven of its last nine games. Although there is a cup at stake, the Argentines will also see the game with Italy as a test against a strong European opponent in the preparation for the World Cup.

Argentina kept the zero in 7 of its last 9 games.

Both teams scored in 4 of last 5 matches between them.

Italy is obviously still reeling from missing the second World Cup in a row. By taking the Finalissima trophy, it can ease that pain at least a little bit. For Argentina, it is working on a great series and the team is already being called favorite for the World Cup by some. Based on the most recent results and the difference in offensive qualities in particular, we are going for a win for Argentina.